We had about 10 days to get from Olympia to San Francisco, so some stops were in order. The first was in a town called McMinnville, Oregon. Peter had mentioned that Howard Hughes’ “Spruce Goose” now lives there at the Evergreen Aerospace Museum, and that sounded cool.

This was a one-off monster, built entirely from wood. SO, unusual in the same way as the Martin Mars Water bomber. And kinda turning this leg of the trip into a “large, old, unique aircraft pilgrimage.” We sort of thought McMinnville would be a waypoint on the way to the coast and southward.

When we got to McMinnville, we found a great RV Park. This was right next door to the Aerospace museum, so quite convenient!

And the museum…WOW. This was absolutely HUGE (I guess it would have to be to contain the enormous Spruce Goose). Two gynormous hangars/buildings. And spectacular. On a par for sure with the Smithsonian and the Dayton Air Force Museums that we have been to previously.

The Spruce Goose was…well I don’t know what to say exactly. “Albatross” might be a good adjective…because it metaphorically implies odd-ball, un-useful and LARGE WINGSPAN. It is hard to convey fully the size of this plane. It is not hard to convey how completely impractical it was…hence the reason only one was built and it flew only once. 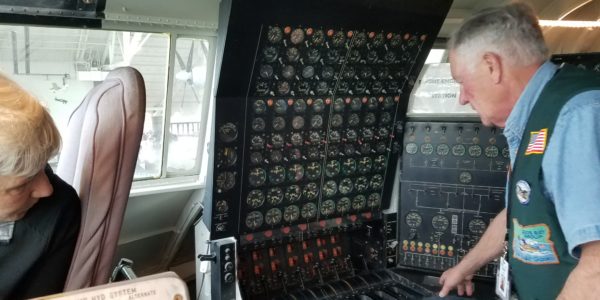 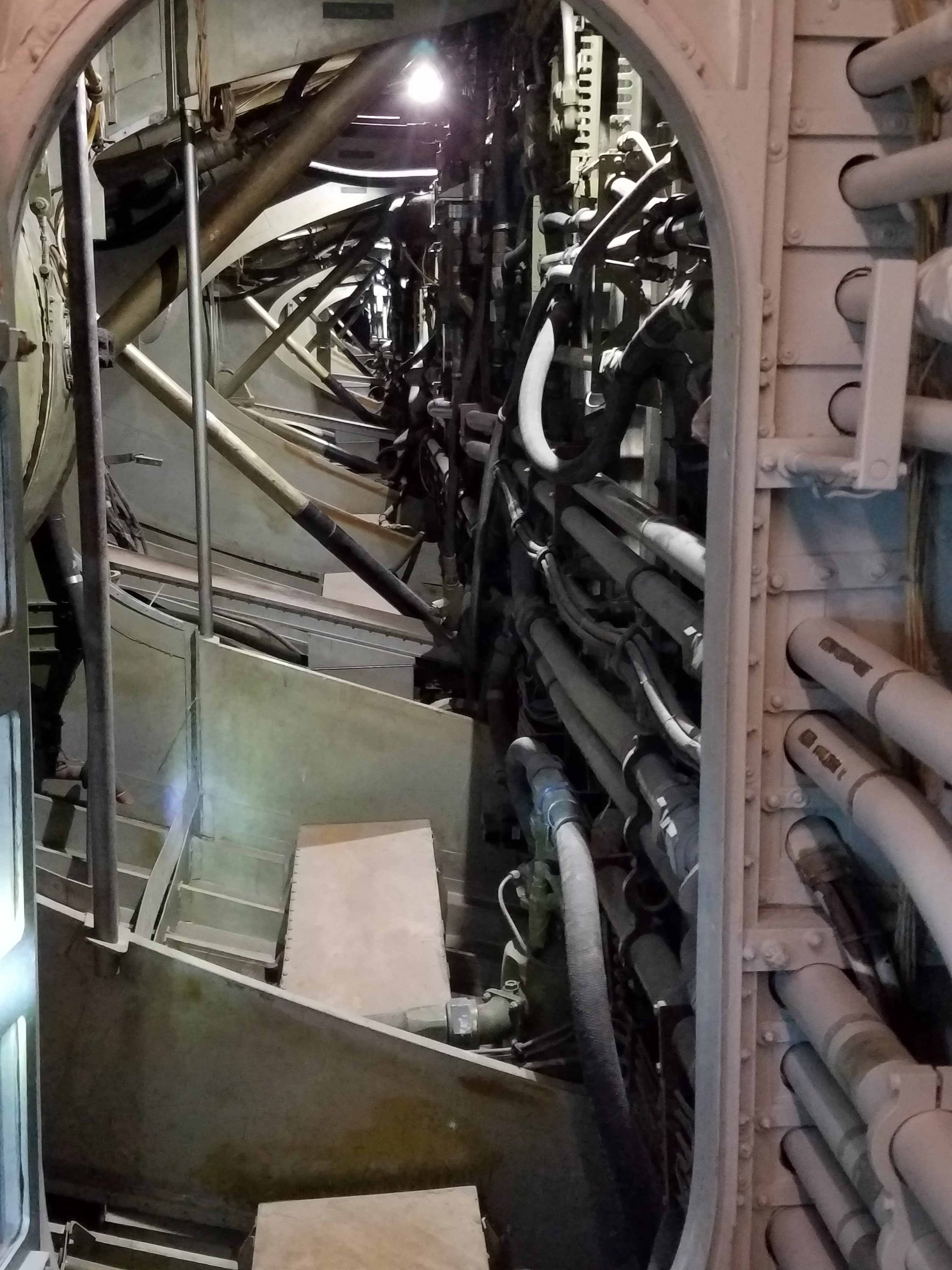 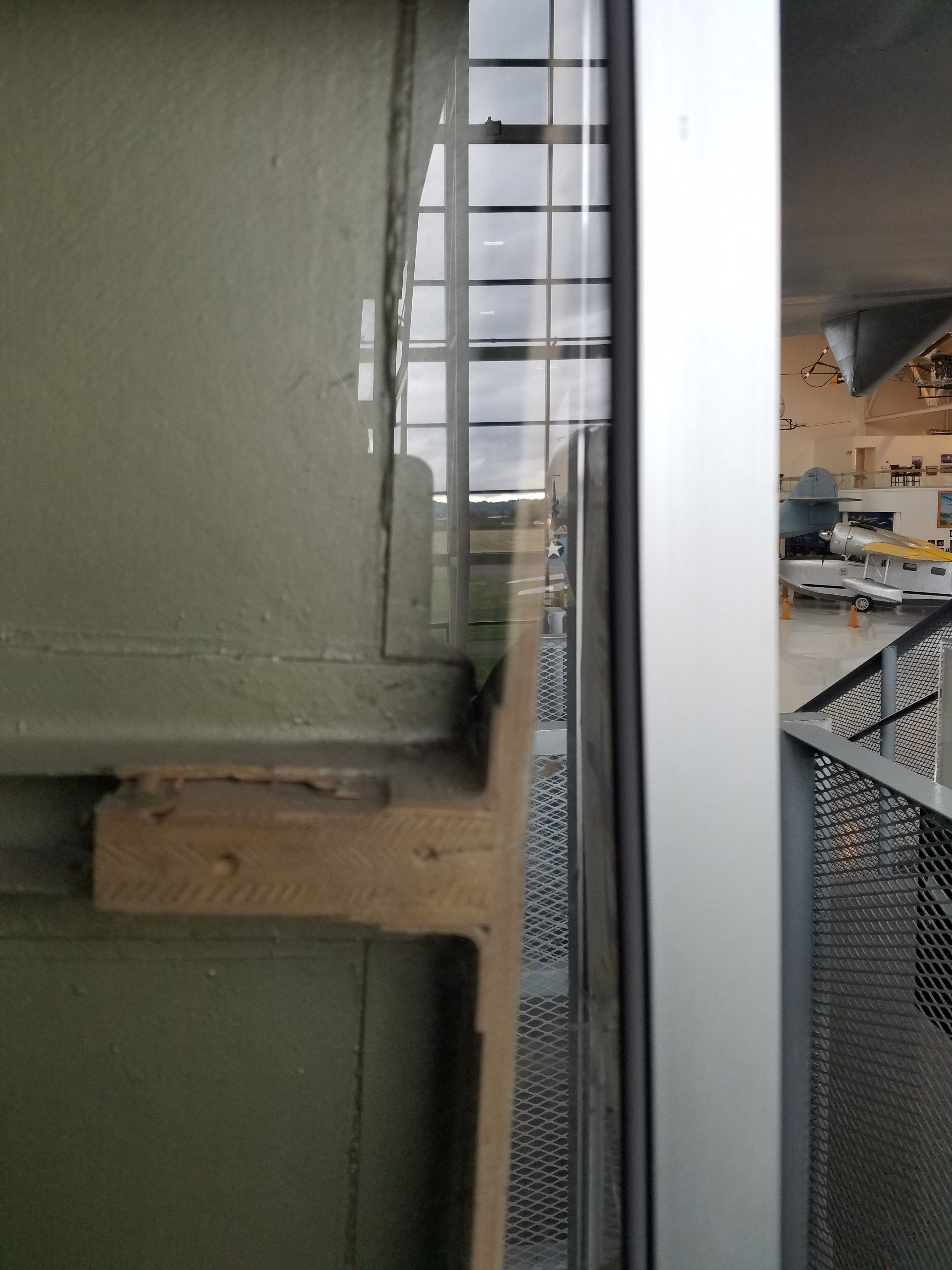 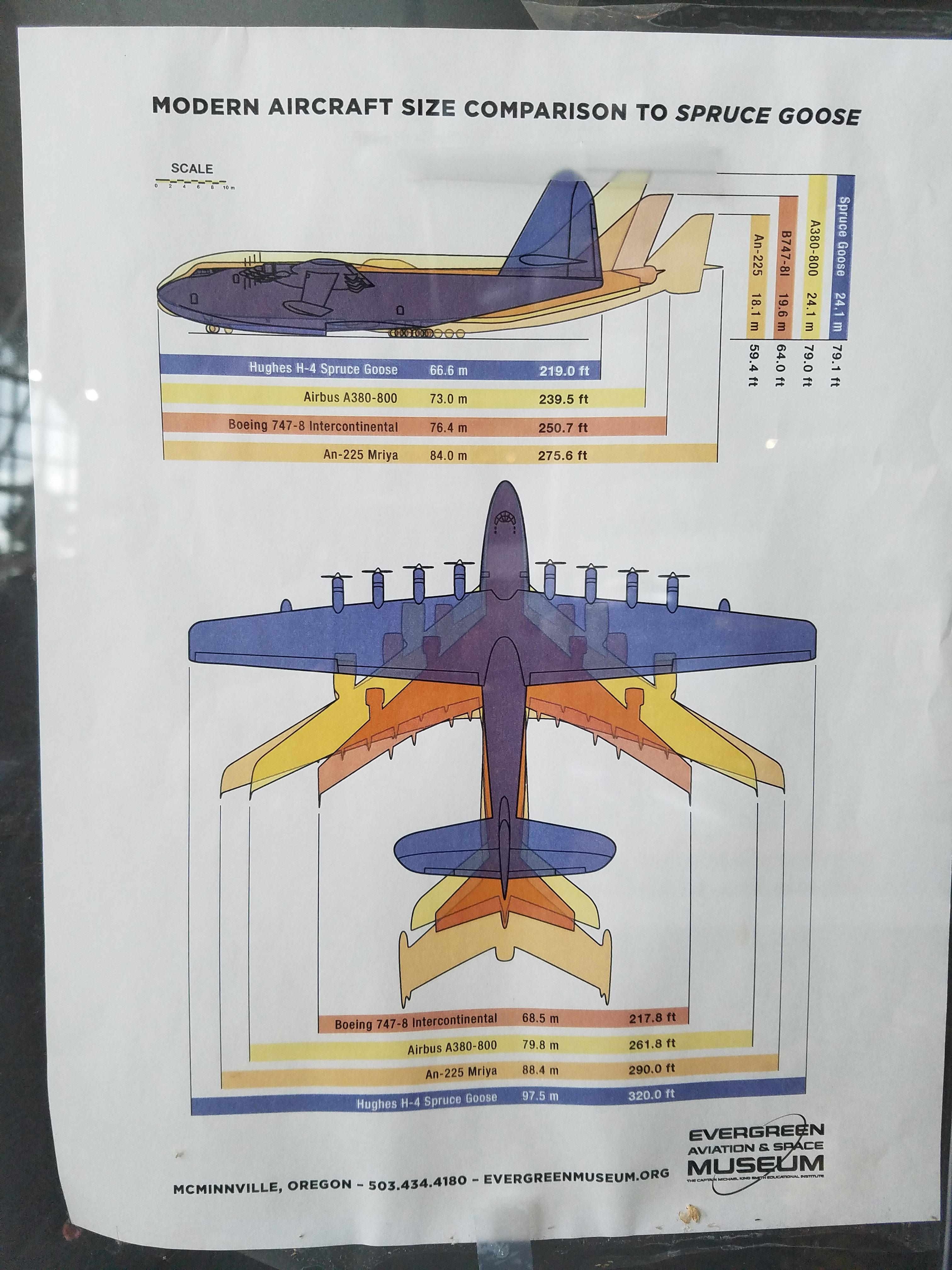 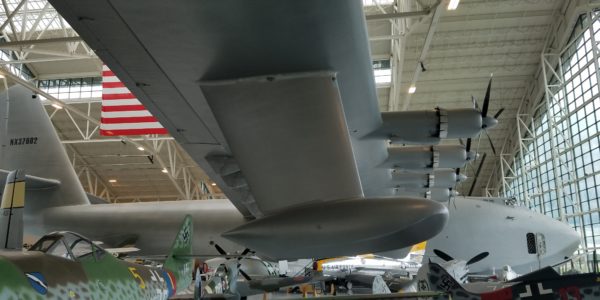 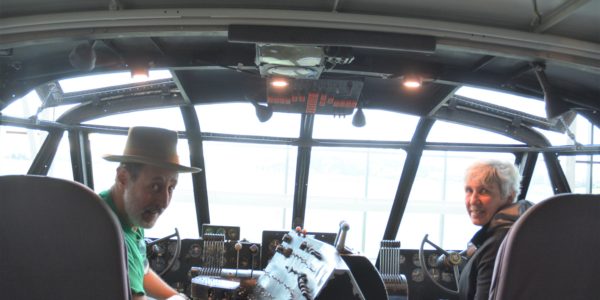 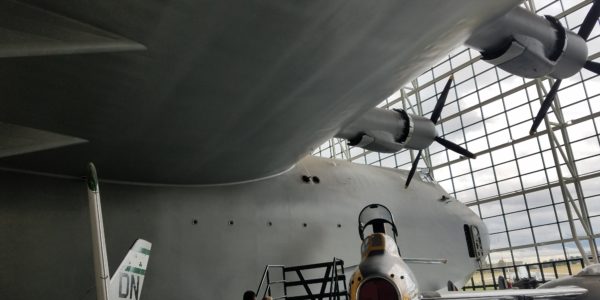 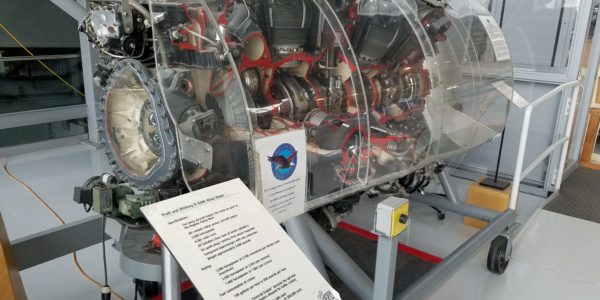 The museum itself is a fantastic place. It was created specifically to house the Goose, which lost its home in Long Beach when Disney decided to no longer host this artifact. The son of the founder of Evergreen Air put together a package to buy the goose (for a nominal $250k) and move it (for upwards of $5M). Then they fully restored it and built a museum around it. And along the way accumulated a fantastic collection of other aircraft, rockets, missiles, spacecraft etc.

I was especially impressed with the range of helicopters, including a suicidal-looking helicopter-platform for a single individual. It was billed as a personal “flying carpet.”

It looked to me like a man-sized, open-air blender. YIKES.

Next to the museum is the world’s only water park featuring a real 747 (a retired Evergreen Air Freighter) as part of the water features. The water chutes emerge from the sides of the plane, which appears to be taking off from the roof of the building.

You cannot make these things up!!!

But before we could even go to the museum, we had to convince the RV Park to let us stay…they don’t allow RVs older than 15 years.

Some of our fellow Bluebirders, who almost all drive buses older than 15 years, have said they prefer parks with such up-front, up-tight, dare I say “racist” age restrictions. Because it makes it clear where you would NOT want to stay. Maybe a Trailer-trash corollary of what W.C. Fields said, “I would not want to [stay in] belong to a club that would[n’t] have me…” Personally, I prefer to press the issue and become ambassadors for “Vintage.” A fine line between “pressing” and encouraging firearm use, I realize…

I explained to the lady on the phone that we were not only vintage…but also fully restored. They asked to see pics of the bus, and I sent a couple which I keep on my phone for just such contingencies. I did NOT send selfies of the occupants because at that moment I was still wearing grease-covered ratty-jeans from the repairs made in Olympia! Anyway, they happily relented, and they even put us in a spot right next to the entrance, so apparently not worried about scaring off newer vehicles.

As ambassadors for lost causes like Vintage RVs, I now need to get to work on the “Aggressive Dog Breeds” discrimination we also run into in many parks. No Pits, Rottweilers, German Shepherds, etc. This kind of makes me angry, because in my experience one is more likely to be bitten by a yappy, little inbred poodle hybrid (not to pick on poodles generically) than by, for example, our best and missed friend and German Shepherd, Heddy.

Or, put another way, dogs are not by nature aggressive…some just have cretin-owners. But, since we at present do not have a dog of any breed, we’ll save this Jihad for a later date.

We discovered there is a lot about McMinnville to like. It is the very HUB of the Oregon Wine industry. There are tasting rooms for 19 Vineyards and for 7 craft breweries and all of these are in a walkable area in the restored downtown. If you widen your circle just a few miles into the countryside, there are perhaps a dozen more.

WE EXTENDED OUR STAY by a day to accommodate this epiphany. Unfortunately, we discovered that many of the WINE Tasting rooms were closed on Tuesday and Wednesday; however we found a Brewery.

Unfazed, friend Dick Stubbs informed us of Lemelson Winery nearby, which WAS open and whose owner went to law school with Tyra. It was not walkable, but when it comes to Wine Tasting, I am happy to be the designated driver.

At Lemelson we tasted, purchased a couple bottles and then toured the facility. They are very proud of their entirely gravity-fed production system. Their t-shirt slogan: “Gravity Flows, Pumps suck.” The wine geek (not meant to be derogatory…I am, after all, a Strategic Geek) explained that Pinot Noir juice is quite fragile…he claimed it can be “injured by pumping…” I find that hard to imagine, but I am not in a position to question.

And the fella at least has good roots…His last domicile before McMinnville? Wrigleyville in Chicago…Lakewood and Addison. In other words, we could have hit his apartment with a stone from our deck. Odd convergence, don’t you think? To be born in WILMETTE and end up working in WILLAMETTE.

We also discovered that McMinnville has a bit of a “freak” component. For example, in the early part of May each year, there is the McMinnville UFO Festival. Apparently, this area has a very high incidence of UFO sightings…and always has…since even before Marijuana became legal. This festival celebrates this, with a parade and with kids dressing up like Halloween.

Since we never really “planned” to come to McMinnville, I would characterize this stop on our “tour” as a fantastic accident. Unplanned, fascinating and inspiring us to keep moving in hopes of finding other happy accidents.

2 thoughts on “An Appointment with Howard Hughes’ Quirkiness”

← Sorting Out Some “Vintage-ness” ← Is A Vintage Bus really an Online Dating Service?!
Next Up

Is A Vintage Bus really an Online Dating Service?!

Some of you may be getting the wrong idea about the pace and focus of our lives in retirement. It…

Sorting Out Some "Vintage-ness"

[caption id="attachment_3233" align="alignleft" width="225"] Pat and Dan Assume The Position![/caption] As with most of the BB issues we have faced,…