Well, Liz returned from New Jersey, and we were determined to do NOLA right. That was to begin with a visit to the WWII Museum and/or the French Quarter (weather dependent). And speaking of weather, that brings me to the particular FIRST we have experienced this week, which we hope never to repeat.

Nervous and unfamiliar with the area (most of which is below sea level) , I spoke with a couple regular campers at the park…

It rained MASSIVELY the day before Liz returned – so much so that the park moved all campers from their lower loop (down by the river Tchefuncte) up to the upper area. That is where we already were, so we did not need to move. Nervous and unfamiliar with the area, I spoke with a couple regular campers at the park, and they said they had never seen the upper loop flood. Nevertheless, out of an abundance of caution, before leaving for the airport, I asked the ranger again just to confirm that RV WHERE YET would be safe while I was gone (not to return ‘til late). He assured me we would be good!

And the bus was right where we left it when we got back that night.
So far in this particular story, we hope to repeat this EVERY nite.

The next morning, we got in the car, ready to head across the causeway to NOLA. But, after a night of additional rain, and flood warnings on our phones, something made me check again with the ranger. Good thing I did, too! The ranger said, “We were just getting our list together – we would have called you in an hour or so. The Park is BEING EVACUATED. The river is rising, we don’t know for sure how high and we want everyone to be safe! “

He said there was a nearby park with some availability, FIRST COME FIRST SERVE. NOT near the river, so NOT prone to flooding. Since we were essentially notified before anyone else, we had about a 1 hour head start. We broke camp as fast as we could (that takes some time – raise awning, bring in Satellite Dish, put up bicycles, Air up bus, put up jacks…etc.) and we were rolling within 45 minutes.

We were at the other park within the hour and because we were ahead of others trying to make the same move, they had ONE SPOT available in their “high ground area.” Turns out some areas of their park were also under water by 6” or so (though no rising river to exacerbate). Still, they did not want to put more campers in such conditions… Our spot in the new park was a thin asphalt ribbon in a sea of mud, but it was high and dry, and likely to remain so!

Our move to the new campground, in the middle of a forest area and on the shore of Lake Ponchartrain, had an interesting benefit/curse. FROGS. OMG…soooooo loud!!! We have stayed in RV Parks near trains and highways and firestations and airports. The cacophony from the frogs at least matched if not exceeded all of these.

And while we are on the subject of the Tchefuncte River, we were given a lesson in Cajun pronunciation. Phonetically, it is “Cha-funk-ta.” Cajun pronunciations are definitely weird, but have nothing on English… Proof: Why is the word “Phonetic” pronounced “fonetic?”

Although moving campgrounds delayed us by an hour, we eventually headed across the Causeway. Our intention was to go to the National WWII museum…but we called an audible on the way…the SUN CAME OUT! We realized from the weather reports that this was unexpected and would not last. The ENTIRE WEEK had been rainy and foggy, and it was expected to remain so for the next week. So we saw the sun and changed up to a walkabout in the French Quarter. The Museum could wait, and would be more appropriate for one of the coming rainy days.

So, our reaction to the French Quarter?

Well, our impression could have been affected by the 100,000 Football Fans roaming the quarter before the Sugar Bowl… There was not a lot of room to roam, or sit or drink or enjoy. Trying to be fair and NOT punish NOLA for that, I would say this:

Las Vegas WANTS TO BE like the French Quarter, and maybe it will be after 300 years of trying!

NOLA French Quarter is not a classy place, (Las Vegas already has that part down!) but the decadence feels authentic (whereas NOTHING is authentic in Las Vegas), well earned and practiced. All the Bars are grungy…as they should be after many hundreds of years of high humidity, rain, flooding (from rain and hurricane – the drink) and debauchery. It is an HONEST grungy, though, with more than a bit of gaudiness and innuendo.  Not at all helped by several establishments with door”men” of the scantily-clad female variety representing Larry Flynt’s “Hustler” empire, which somehow seem totally in character.

We did manage some Oysters and Po’ Boys. And a couple of beers at a bar with some live music – pretty good live music, actually. Tried to get to Café du Monde, but the lines (see above about the Sugarbowl) were impossible. Since a Beignet is a Beignet, we went elsewhere. And we managed some streetcar riding, cemeteries, the Katrina Memorial etc. 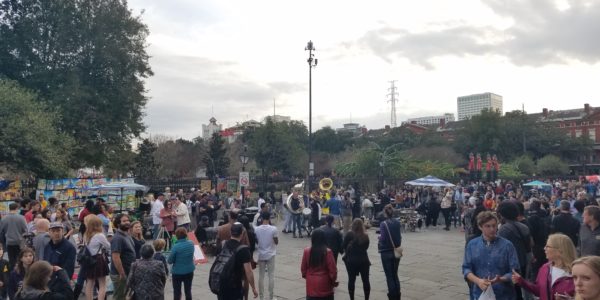 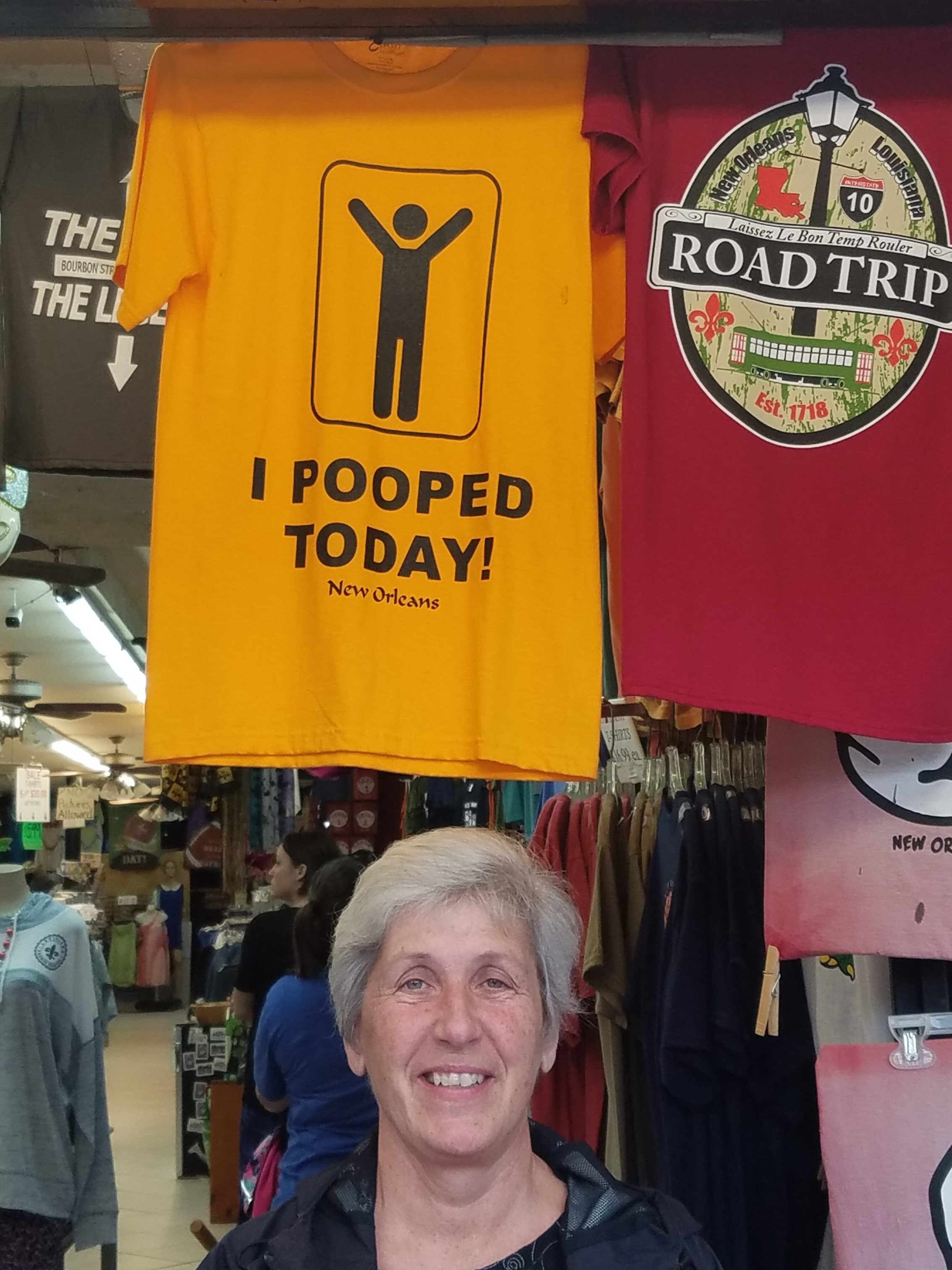 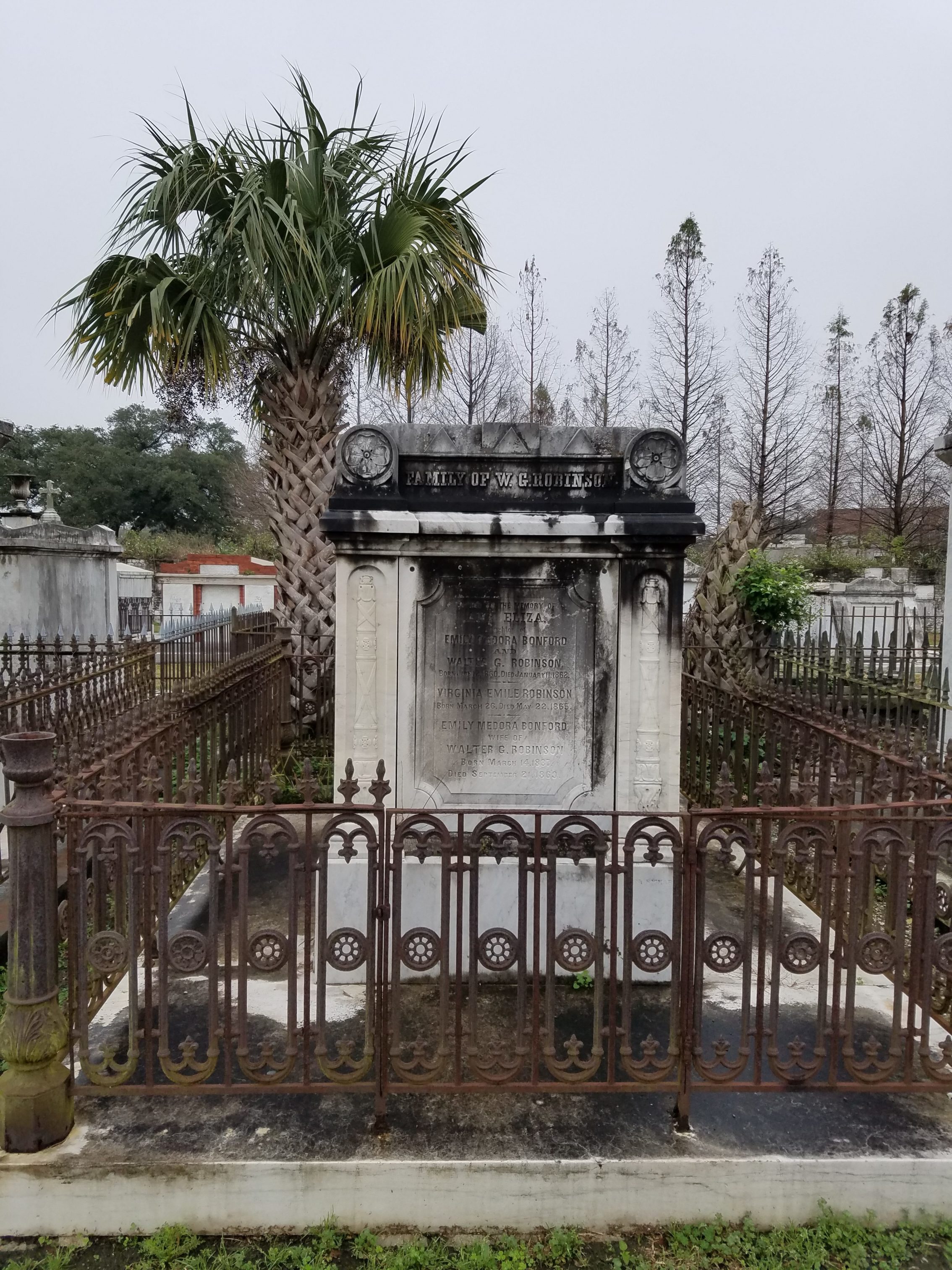 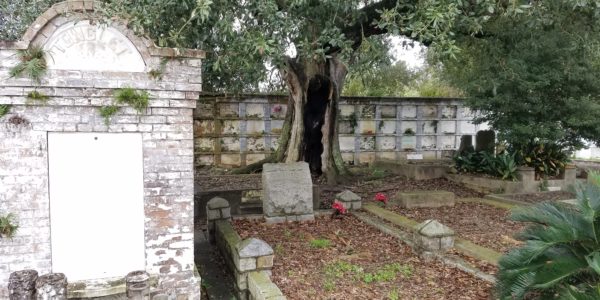 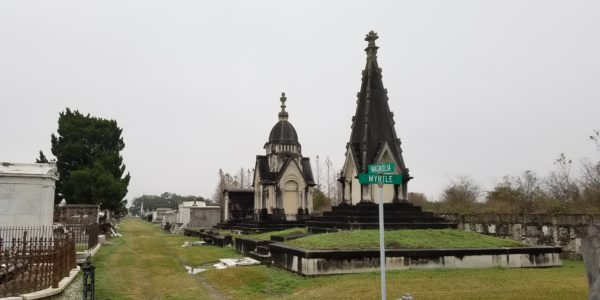 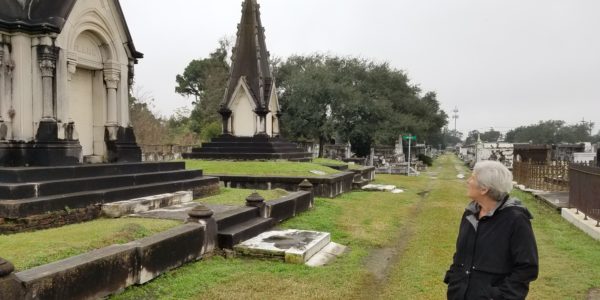 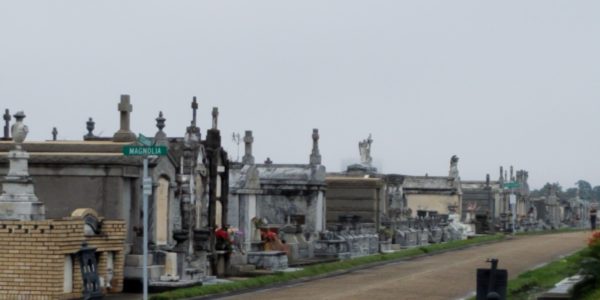 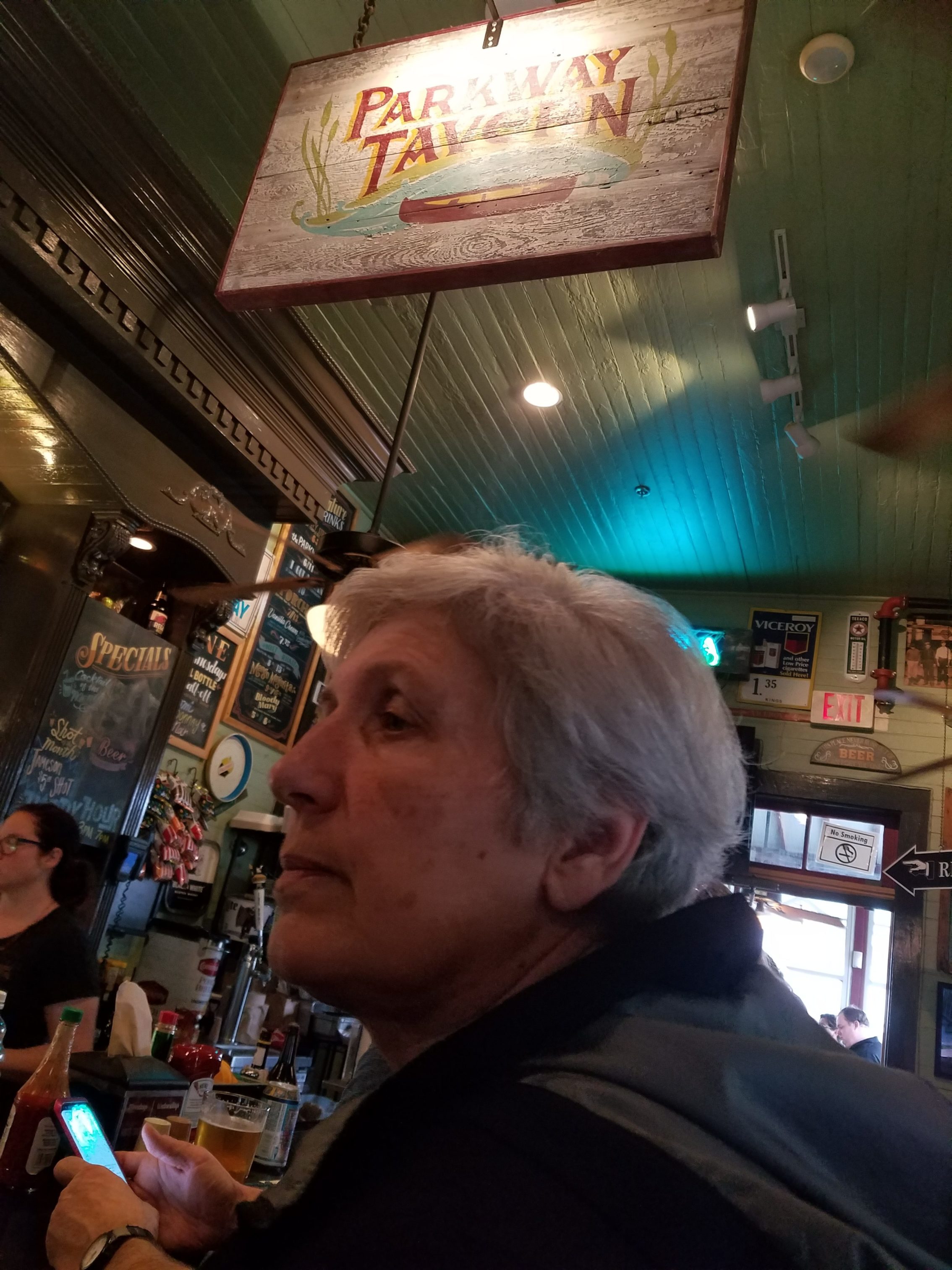 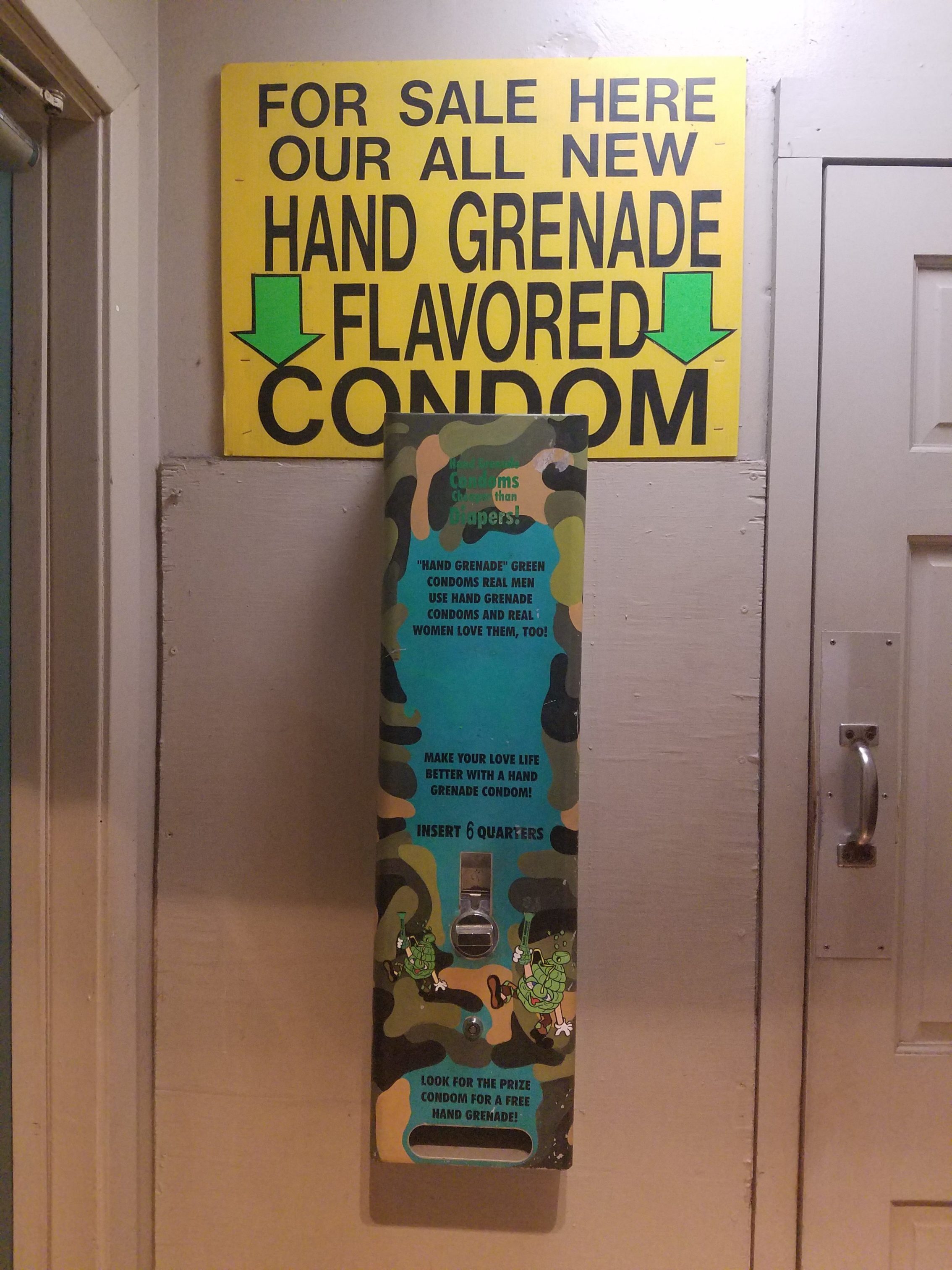 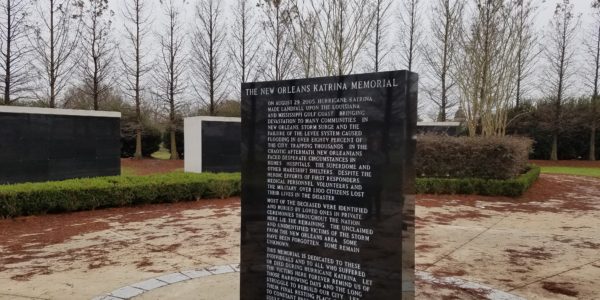 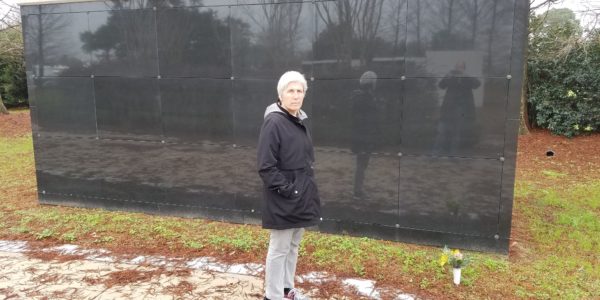 We even were in a Streetcar ACCIDENT…not an every day tourist activity!  A car decided to turn in front of the street car — the driver later said “I thought he could stop…” He couldn’t.  (There aren’t words for the idiocy of that driver…)

The streetcar driver SCREAMED. Waved at the car. Put the streetcar in reverse…all to no avail.  Leading to the most non-violent collision ever.  The streetcar basically nudged the auto out of the way.    But at that point one of the main streetcar lines was stopped in both directions.  A local on the car with us said it would take AT LEAST an hour for NOLA Cops to arrive (and for the accident attorneys to descend on all the riders looking for a pay day).    Liz and I decided to walk back to the French Quarter rather than wait– about 3 miles down St. Charles Street through the Garden District.

And we enjoyed the Sun, which by the end of the day of wandering was already retreating behind a fog bank, not to be seen again for the rest of our visit to the area.

Speaking of music, we had a REAL TREAT during our stay. I have been following a Blues Artist, Tab Benoit, who hails from Baton Rouge (Houma, actually…but as he has said, “You cannot learn to play the Blues in Houma, so I went to Baton Rouge”), for several years. I was hoping we might cross paths at some point – he tours extensively as do we!! But, so far in our retirement it seemed like he would be west when we were east and vice versa.

Well, on a whim, I asked Dr. Google where he was for Christmas, thinking he might be home(ish)! Turns out, he was! Playing in Lafayette on 30 December and NOLA on New Years Eve!.   At sister-bowling alleys, of all places! Liz and I decided to forego the madness of the closer NOLA option – we have always preferred to spend NYE IN and away from the drunks. We chose to drive to Lafayette since we wanted to also break bread with friend and Cajun mentor, LC Cambre who lives there, and this seemed way too convenient and coincidental to ignore!

Hard to exaggerate how good this all was.

Well, the concert was AWESOME as expected. Perhaps more so. I had been told the guy puts on a great live show, which is an understatement, and he is also personable, approachable and extremely talented. And the venue – as mentioned — was a bowling alley where probably 2-300 people at most attended. Large Dance Floor, too!

As a Yankee, I am still trying to get into the whole Grit-thing…

For after the concert, we scammed an AIRBNB about 3 blocks away – choosing NOT to drive back the 2 hours to our campground AFTER midnight and a few beers. This allowed us ANOTHER meal with the aforementioned Mr. Cambre. This time I had a very unusual dish recommended by LC:  “Grillade and Grits.” Now, as a Yankee, I am still trying to get onto the whole Grit-bandwagon. But these were GOOD!!! “Grillade” was brisket in brown gravy, served on a bed of grits. “Gravy” is not the plain stuff we have up north – it is a flavorful sauce–in this case brown in color. Spaghetti Sauce would be called “Red Gravy” in Louisiana – you get the picture.

Arriving back in NOLA after the above breakfast, and of course, in the rain, we decided to do the WWII Museum. This was as awesome as promised…lots of artifacts, audio-visual presentations, historical documents etc. We wondered why the “National WWII Museum” was in NOLA in the first place. This has to do with the “Higgins Boat” which was the landing craft that arguably won WWII. All amphibious invasions carried all the troops in Higgins Boats from troop transports to the beach. The Higgins Boat Company was in NOLA. Question Answered!!

After our time in NOLA, we began our slow Mosey westward towards a rally we are attending in Quartzsite, Arizona. We’ll be discussing that LOTS MORE in future posts. But, more immediately, this westward path has allowed us to catch up with old friends along the way. The NEXT post will be about that and more (and less, of course).

← We won’t be “Ringing out the Old…” We live in it! ← Friends and other Weirdness
Next Up

Friends and other Weirdness

Leaving NOLA, our first stop was Houston, Tx. Here our plan was to visit Barbara and Jacob Leon for a…

Our 2018 travel season has ended with a ritual we have come to appreciate: An annual visit to our friends…